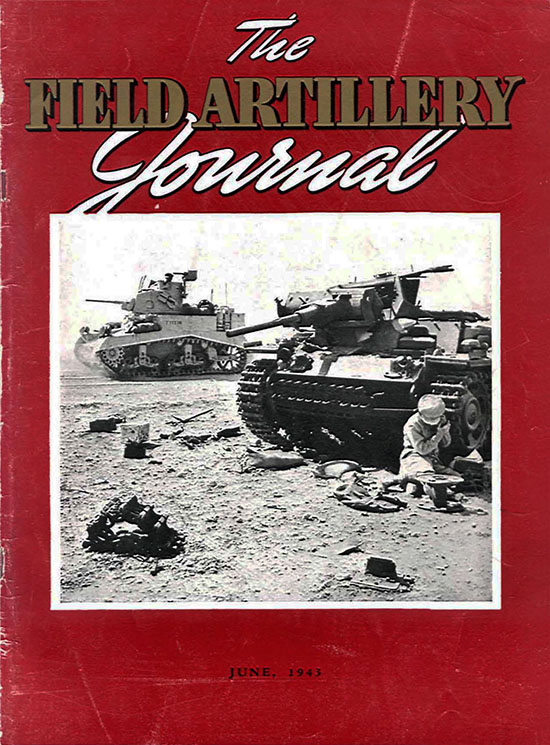 With 10 games on tap this week, almost every team in the Infantry School League will make two appearances.  The 176th Spirits play only once, facing the 124th at Gowdy Field on Sunday, while the Gators and the 144th play there games each.

Tomorrow night the Academic Regiment Profs will try to add another one in their long victory string, taking on the Tanks at Gowdy Field.  Meanwhile the gators and Rifles will be battling it out at Harmony Church.

Most prominent game of the week is that between the undefeated Profs and the powerful Student Training Brigade at Gowdy Field on Sunday.

The league fight seems to have settled down to a battle among the Profs, the Brigade and the 300th.  Sunday’s game will either practically eliminate the Brigadiers from the first-half race or so tightened up the Loop that a victory also by the 300th over the Profs can throw the lead into a three-way tie.

On offense the Profs have a decided edge over the Brigadiers, batting .300 as compared to the Brigade’s team average of .240.  Only one Brigadier is batting over .300, the bats of bulk of the Brigadier’s power apparently being centered in Red McCluskey who is batting an even .500.  McCluskey’s ­output includes six doubles and two homers.  The Profs have seven men hitting over .300, led by Punk with .428, Fenno with .413, Morre with .366 and Niebler with .347.

The Profs have average better than 12 runs per game while the Brigadiers have averages six.  In extra bases the Profs also have the advantage, boosting 15 doubles, four triples and four homers.  The Brigade has 11 doubles, no triples and three homers.

The hustle should be the Profs as evidenced in their base-stealing record of 22 steals in seven games.  The Brigadiers have swiped four bases in six games.  Benny Zieniara is far ahead in the league with seven robberies to his credit.

In fielding both teams are about even while the hurling is also about on a par.  In Prendergast and DeVelder the Brigadiers can boast two brilliant pitchers; but the Profs can counter with Dickinson and Rundur.  Sunday’s game will probably see a tight pitching duel between Prendergast and Dickinson.  The previous game went 11 innings before the Profs eked out a 5 to 4 victory.

The second game of the Gowdy Field double-header featured the 176th against the 124th in a game that will throw light on the three-way fight for fourth place now raging among the Spirits, Gators and Rifles.

Highlights of last week were the Profs making it seven straight in whipping the 176th , 6 to 1, and the rampaging 300th winning its sixth straight as Cave hurled a 4 – 0 shut-out over the 176th, holding the Spirit to three hits.

SCHEDULE FOR THE WEEK

Team Standing as of Tuesday, June 1

It had to happen someday!  And the Student Training Brigade decided there was no time like the present.  So, on Sunday afternoon, led by burly Jim Prendergast on the mound, they hauled off and socked the Academic Regiment Profs right into the defeat column, handing the Profs their first licking of the season after the Academics had piled up nine straight Infantry School League victories.  The score was 2 to 1.

As anticipated, the game was a beautiful pitching duel between Prendergast and Dickinson, both pitchers hurling eight scoreless innings.  But the Profs could only squeak across one run in the first on an error, single and infield out, while the Brigadiers exploded in the fifth with a single and two successive doubles for their two runs.

The Brigade triumph, plus its Monday win over the 244th Field Artillery, pulled the team into a second-place tie with the 300th Infantry.

The second game of the double-header saw the 124th Infantry come from behind to smack the 176th Spirits, 5 to 4, making the sixth consecutive triumph for the Gators.

MOST SPECTACULAR INDIVIDUAL STREAK OF Red McCluskey, Brigade third-basemen, who boosted his batting mark to .345, 18 hits in eight games, including seven doubles, a triple and two homers.

Holding the spotlight next week is the game between the 300th and the 124th at Harmony Church on Sunday.  Both teams have been on a rampage and two winning streaks of six games each will collide when the clubs face each other.  On the same bill the Student Training Brigade will take on a strong 176th team which is much tougher than its record indicates.  Meanwhile the Profs will be playing the Columbus Foxes at Golden Park.

Next Wednesday will see another highlight when the 300th and the Brigade fight it out for possession of second place.  The winner will be in a strong position to challenge the Profs for the first-half championship, while the loser might just as well resign its self to making plans for the second half.

Scores of the past week:

Standings as of Tuesday: 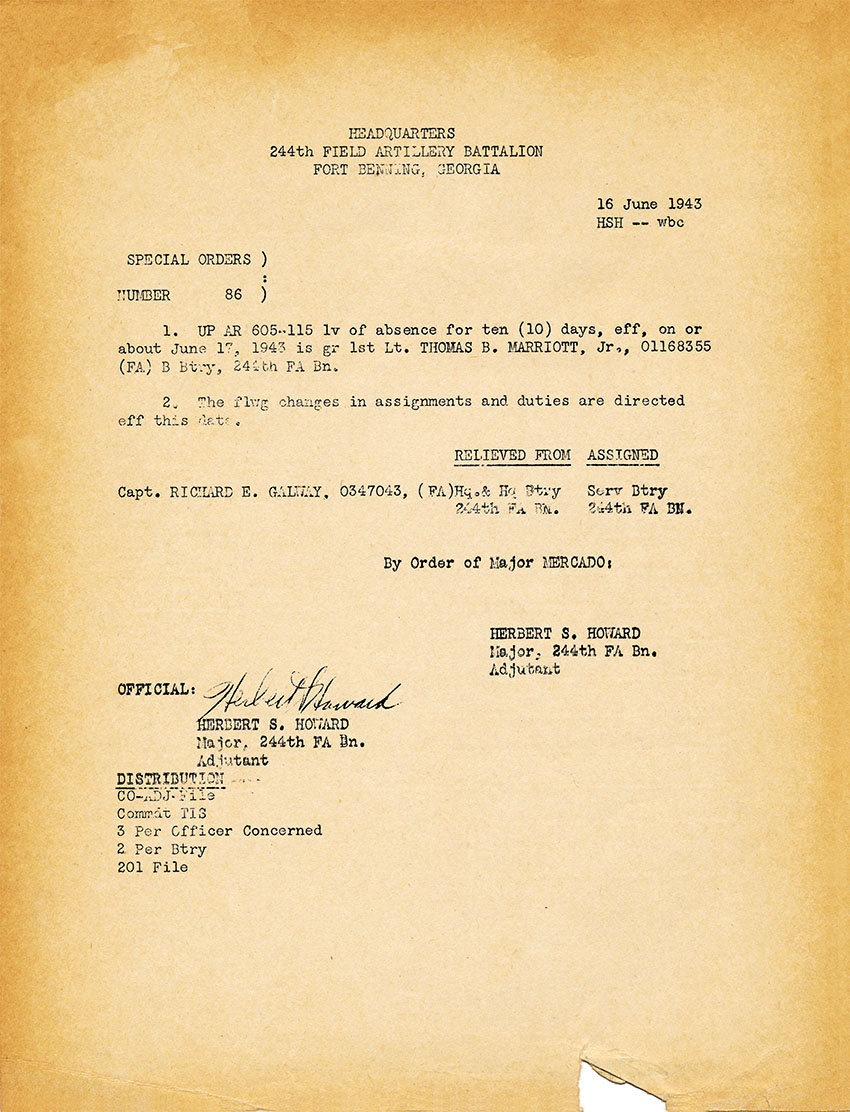 The 300th Infantry ____ had all eyes focused upon it this week as it ran its winning streak to eight straight games while cracking the seven game streak of the 124th Gators in a beautiful 10-inning hurling duel between Fefty Francis of the 300th and Wilder and Christie of the 124th.  The 300th finally won out, 3 to 2.

Francis gave up only four hits in the 10 innings and fanned 13.  The win gave the Triplets sole possession of second place and put them in a position to threaten the lead of the Academic Regiment Profs who are still on top of the Infantry School League.

The 300th team is now two games behind the Profs but is only one behind in the loss column.  If the Triplets can continue their winning stretch, the Prof 300th game on July 2nd should be the pay-off game for the first-half championship.

Biggest upset of last week’s play was the 6 to 5 victory of the 176th over the Student Training Brigade.  Cooper, striking out 17 Brigadiers, gave up only six hits.  But at that it took a three run rally in the ninth for the Spirits to win.

The 176th kept rolling on Monday, winning an 11-inning game from the STR Rivles.  Again the Spirits had to put on a ninth inning rally, scoring two runs to tie things up and throw the game into extra innings.

The same night at Harmony Church saw Joe Dickinson pitch a two hit shutout for the Academic Regiment, the Profs blasting the 124th, 2 to 0, to mark up their 11th league victory.

In the one other league game last week the Profs walloped the STR Rifles, 10 to 5.  Herb Moore had a field day at the plate, knocking in eight runs and hitting a home run with the bases full.

In on of the big games of the season the 300th clashed with the Student Training Brigade last night to settle the ownership of at least second place, but the game was played after the Bayonet had go to press.

Highlights of next week’s schedule is Sunday’s game between the rampaging 30th and the oncoming 176th.  The game is the first of a double-header at Gowdy Field which also features a clash between the Student Training Brigade and the 124th Infantry.  This latter game was pushed up from June 30th.  Also on Sunday the Rifles take on the 764th Tanks at Gowdy Field at 7 o’clock.

Tomorrow night Profs and the 244th Field Artillery meet at Gowdy Field and the 300th and the Rifles face each other at Harmony Church.

On Monday it’s the 174th against the 244th and on Wednesday the Brigade and the Rifles will fight it out.  Both games are at Gowdy Dield.  All games with the 71st Engineers have been canceled. 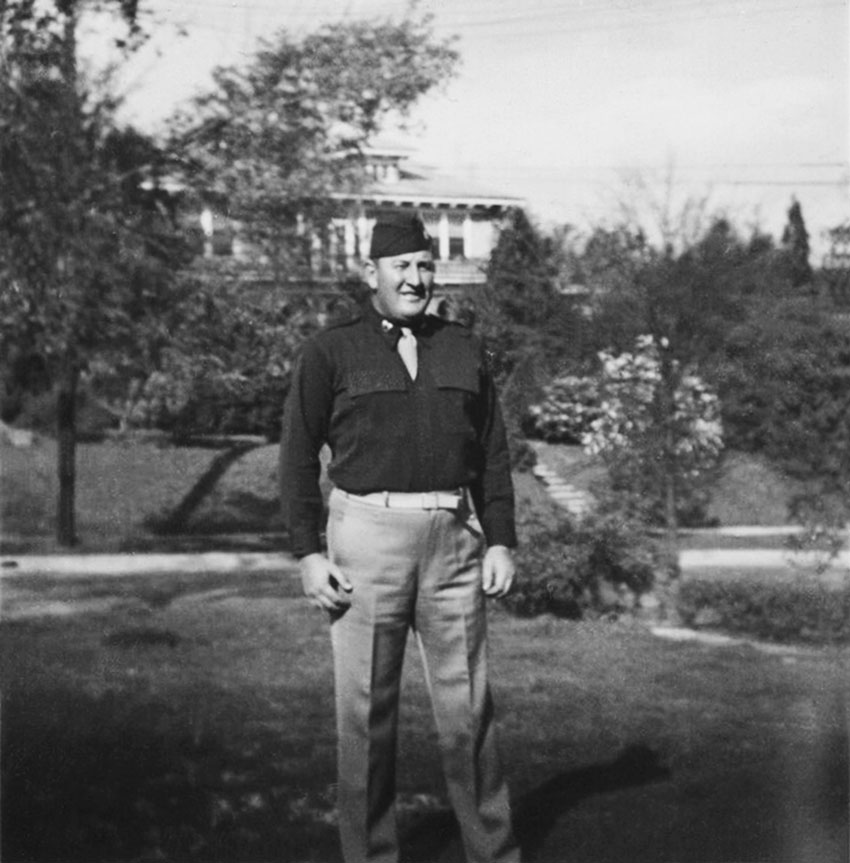 Through all the furor of a hectic Sunday triple-header which saw all the favorites toppled, the idle Academic Regiment Profs emerged with undisputed possession of the Infantry School league first-half championship.

Although the Profs still have to play the 176th Spirits on Monday and the 300th Triplets next Friday, the games will have bearing only on the fight for second place as no matter what the Profs do, the title is theirs.

Ownership of second place however, is a complete scramble.  Four teams are mixed up in the fight with only one game separating the current second place Student Training Brigade and the fifth place 124th.  In between are the 300th and the 176th.

Two days last week settled the championship.  On Friday night at Gowdy Field the Profs tore into the 244th Field Artillery for a 17 – 3 trouncing.  The victory assured the Profs of at least a tie for the first-half crown regardless of what happened in the remaining games.

Meanwhile, at Harmony Church, the 300th took a 6 – 4 clout on the chin from the STR Rifles, thus eliminating the Triplets from all title hopes.

Then on Sunday the scrappy 124th Gators took a 13-inning 3 – 2 thriller over the Brigade and out went the Brigadier hopes.

On the same bill the 178th Spirit shoved themselves into the second-place fight by slapping the 300th 8 to 5, and then, the following day, bolstered their chances by whipping the 244th F. A. 7 to 3.  The third game of Sunday’s triple-header saw the 764th Tanks shut out the Rifles, 2 to 0.

Tomorrow night the 300th and the 764th Tanks clash at Gowdy Field, while the 124th will close its first-half season at Harmony Church playing the 244th F.A.